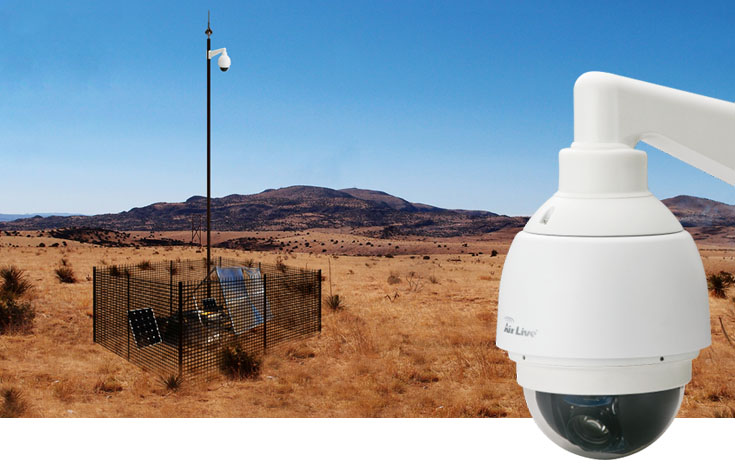 In working with the American Border Patrol, a partner of Airlive has developed a remote IP-based border surveillance camera system between 2006 to 2009, and further developed methods of counting all who cross the border between ports of entry since 2009. For this project, installed at the northern border of Mexico, Airlive with its partner has provided effective border security with a rich-featured cost-effective solution.

Border surveillance and protection normally requires a 24/7, day and night vision large area scanning system to detect, and track unauthorised intruders- be they hostile forces, terrorists, smugglers or illegal immigrants or others. The border may be a mountain, shoreline, sea or urban area, and it may include areas where peoples’ activities are permitted.

As requrested by the authorities, all areas of long border line, wide urban territory and open spaces must be carefully monitored. In order to ease customs inspection and prevent illegal trade along the borders, the government requested and adopted a more efficient method by using advanced megapixel surveillance instead of man power which required a great deal of resources for surveillance to cover these vast and diverse areas.

Before making their final decision on which solution to deploy, the border agent considered many aspects such as system use, stability, quality and reliability. It was the Airlive SD-2020 camera with its border “identiseis” technology that was chosen to complete the job after rigourous rounds of performance testing. The Airlive SD-2020 camera was installed at a border line of 500 ft. in the northern region of the Mexican border known as the drug smuggling corridor. With auto pan/preset/sequence/cruise functions and high speed pan/tilt mechanisms, the system can easily be set to monitor much wider areas by using only one Airlive SD-2020 and track any suspicious movements or objects. The SD-2020 network speed dome camera ensures images are of a crystal clear video quality. On request, a smart tracking function can be chosen as an option which enables auto-detection of any unauthorised moving objects in night mode.