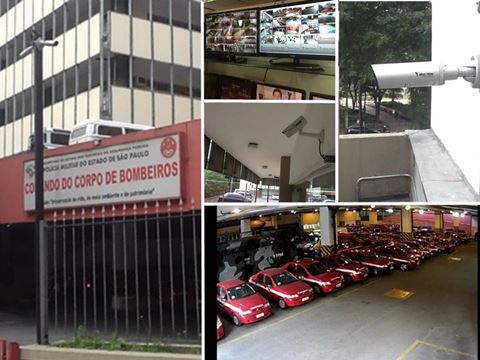 Bombeiros do Estado de São Paulo, a local fire department in São Paulo, Brazil, boasts a long and proud history of protecting its citizens. The primary missions of the fire department are the implementation of civil defense, fire prevention and elimination, search and rescue, and public aid in the state of São Paulo. Recently, a comprehensive security plan was devised to enhance the overall security of the fire department. A major aspect of the plan was to upgrade the existing security system of the department to not only improve the monitoring of external areas and the main entrance, but also support stationed guards in making their virtual rounds, decrease the risk of unknown attacks, and enhance the recording of daily activity outside the department.

The regional distributor Bellfone Distributor and local security system integrator Invert Systems were commissioned to carry out the task and they selected Vivotek cameras. Alpha-Digi, Vivotek’s national distributor in Brazil, also plays an important role in supporting both system integrators’ equipment procurement. To satisfy the requirements of the security plan, 44 Vivotek cameras were installed, comprising the IP8332, IP8335H, and FD8136 models, to upscale the entire security system within the department.

The project commenced on 27 March 2014, successfully installing 11 x IP8332 models, 28 x IP8335H models, and 5 x FD8136 models in and around the department. The IP8335H network bullet camera is characterised by an HD WDR CMOS sensor for use in light-challenging conditions. The WDR Pro feature of the camera utilises a double shutter technique to capture the dark and bright regions of an image, which are then combined to produce true-to-life images. The two frames are then combined to generate a highly realistic image. In short, the IP8335H is ideal for high contrast environments such as parking lots for fire-fighting service cars in this case.

The IP8332 camera features a removable IR-cut filter and IR illuminators that are effective up to 15 m. In addition, the camera is housed in a weatherproof casing, allowing it to withstand harsh or unstable weather conditions, rendering this model ideal for a variety of outdoor applications that require open angles. Subsequently, this camera model was deployed in numerous outdoor and patio areas around the department, and in the basement.

The FD8136 is a quite small network fixed dome camera. This model features Power over Ethernet (PoE) functionality, which makes installation quick and easy, and selectable focal lengths, which renders the model ideal for compact or enclosed spaces such as lifts.

In order to centralise and efficiently manage video at the fire department, Vivotek’s professional central management software Vast was introduced. With intuitive functions and numerous features, the 44 cameras are well managed in a hierarchical system structure, enabling the monitoring, recording, playback and event trigger management with ease-of-use and efficient control.

Following the upscaling of the department’s security system, relevant personnel have expressed that the project was a great success, and on-site security has improved exponentially. Stationed guards now have access to a comprehensive layout of the entire department from the monitoring room, making it easier to identify the weak points where patrols should be reinforced. With the responsibility of safeguarding the lives of countless citizens, Bombeiros do Estado de São Paulo, like all fire departments worldwide, is a hallmark for security. Protecting others is a persistent goal of the department, yet the safety of the premises is equally important. In this context, scaling suitable products that satisfy specific clients with a high level of strategic knowledge can be quite challenging. Nevertheless, Vivotek fulfilled all client demands, and according to the company all parties involved expressed a high level of satisfaction for the outcome of this project.