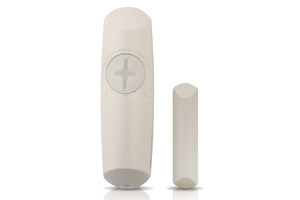 If an intruder attempts to force, smash drill or even saw through a ShockTec detector protected window, door, wall or roof, the break-in is detected via a digital microprocessor which analyses the vibration signal received from a piezo electric sensor, and an alarm trigger is activated. For increased accuracy, on-board digital signal processing differentiates between naturally caused vibrations, filtering out frequencies that cannot be caused by an illegal entry attempt.

Two detectors in one, ShockTec Plus models include two reed switches, one door/window magnet and the second for detecting magnet tampers. ShockTec Plus detects the vibrations caused from intrusion attempts by force and activates an alarm while the intruder is still outside – providing unparalleled and uninterrupted perimeter protection. ShockTec™ Plus can be connected to two separate zones in a control panel and any attempt to defeat the detector by using large magnets will cause a tamper alarm.

“The ShockTec range offers end-users increased security via its advanced integrated wall tamper feature, and for the installer, offers easily customised calibration per installation using tri-color LEDs with ‘over-sensitive’ and ‘under-sensitive’ visual indications,” says Steve Riley, Commercial Director of RISCO Group UK & Ireland. “The addition of ShockTec Plus means users have the choice of Grade 2 or Grade 3 and with or without magnet and contacts. This makes the ShockTec range the perfect shock detector choice for high-security applications.”