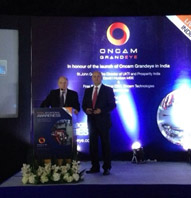 Oncam Grandeye, the security division of Oncam Technologies, formally launched its regional office in India at an event on October 14 at the British High Commissioner’s residence in Delhi. The next day, representatives from more than 120 businesses, as well as local dignitaries, attended a technology seminar there, which showcased Oncam Grandeye’s 360-degree CCTV products. Pictured are Firas Bashee CEO and David Hudson Regional President at the launch.

St John Gould, the British High Commission Director for UKTI and Prosperity in India, said: “Oncam is a great example of a bright, innovative and advanced company bringing British technology to the global market. Their 360-degree camera solutions are used widely in the UK and other countries, and we look forward to seeing their success in India. Prime Minister Modi has encouraged international businesses to engage with India. UK businesses like Oncam are doing this in significant numbers.”

With 1.2 billion inhabitants, India is the tenth-largest economy in the world relative to its GDP. Companies worldwide are introducing technologies and creating new companies. According to a February 2014 report by SeedStar, nearly 2,500 startups were born in India, and with nearly half of its population under 47, that trend is certain to continue, helped by a tech-oriented workforce.

Oncam Grandeye last month launched its office in Singapore, and it has already opened an office in Gurgaon and hiring local tech staff; it is already providing 360-degree surveillance for Orphans Village Delhi’s new, purpose-built orphanage, comprised of 24 buildings and an integral school. Other worldwide users include the MGM hotels in Las Vegas—the Aria, MGM Grand, Bellagio and Mirage—Subways stores and Royal Caribbean cruise lines.

Firas Bashee, CEO, of Oncam Technologies, said: “As we expand into Asia, there is no better country than India for us to launch our new technology. With one of the fastest growing economies in the world, its critical infrastructure, locational advantage, population, workforce, and one of the most developed higher education systems across the globe, we are excited at the opportunities and the partnerships we can create in India.” Visit http://www.oncamgrandeye.com.