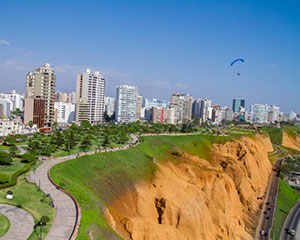 Since 2006, the Municipal District of Miraflores in Lima has been steadily upgrading their Indigovision solution. This continued investment has earned Miraflores national recognition and awards for its management of technology in relation to public safety and crime reduction.

The solution was originally deployed as part of the Central Alerta Miraflores (CAM) project. The aim of this project was to maximise the response speed and efficiency of law enforcement personnel, and to promote the reporting of incidents. Today, there over 137 cameras installed across Miraflores; each providing 24 hour coverage, with audio integration included on cameras in key sites.

The Indigovision complete IP video solution has been deployed across 17 cities in Latin America resulting in a significant decrease in local crime. The Serra beach area, near Vitoria in Brazil, has seen a dramatic drop in crime since the local authority s technology. This is not an untypical situation as other cities in Brazil, Argentina, Peru, Chile and Mexico have found after installing Indigovision systems.

Implementing CCTV surveillance over large urban areas is technically very demanding. Whether it is to monitor criminal activity or manage traffic, remote wide-area monitoring creates a challenging even more so with the high crime rates found in many Latin American cities.

The company believes that what makes the Indigovision technology ideal for these applications and sets them apart from other digital CCTV solutions is its class-leading MPEG-4 and H.264 compression technology. Evidential quality video can be transmitted across standard IP networks over large distances with minimal an important issue for developing countries that often lack a proper communication infrastructure. This ensures latency is kept to a minimum, which allows PTZ cameras to be controlled smoothly from a distance, and wireless networks to be deployed easily to overcome the cabling problems associated with wide-area surveillance. CCTV operators in a number of the Latin American cities are using the fully synchronised high-quality two-way audio capability, which is transmitted alongside the video, to broadcast public announcements through camera mounted speakers.

The success of these projects in Latin America has been replicated by Indigovision in many other city-wide IPCCTV monitoring systems around the world. Traditional analogue CCTV technology is not suited to the large distances involved in wide-area surveillance such as city centres, road and rail networks, ports and airports. IP-based systems are also ideal for extending existing CCTV installations and creating a hybrid solution.”