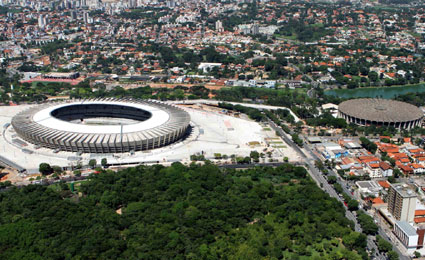 With the approaching of the world soccer championship in Brazil, security is becoming more important in this world’s largest single-event sporting competition watched by more than 700 million people. Johnson Controls, the global multi-industrial company, has brought its profession to create safer, more efficient stadiums for fans and players to join the event.

The company installed and integrated building systems inside three stadiums, including Arena de Sao Paulo, also known as “Corinthians” Arena, where the opening match between Brazil and Croatia will be played on June 12. The company also improved safety and efficiency at two other stadiums where top-seeded teams Argentina, Colombia, Uruguay,Belgium and Switzerland will compete. Those stadiums are Estadio Mineirao in Belo Horizonte and Arena Amazonia in Manaus.

“The stadiums’ technologies are designed to communicate with each other to create a great venue for the event,” said Dave Myers, president, Johnson Controls Building Efficiency. “The results will ensure comfortable and safer environments for players and fans.”

“Johnson Controls has delivered the best stadium environment possible using its global integrated technology expertise,” said Otavio Goes, technology manager of Estadio Mineirao. “We now have a world-class stadium that fans and players will enjoy during the event and for many years to come.”