Africa key focus at day one of Securing Asia 2014 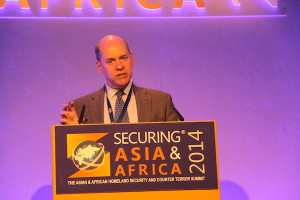 Day 1 of Securing Asia and Africa 2014 commenced on 14th July 2014 at the Queen Elizabeth II Conference Centre, providing a dedicated forum for international delegates and experts from approximately 50 countries in Asia, Africa, the Middle East and Europe in the field of homeland security and counter-terrorism to exchange their ideas and experiences on the current global climate.

In contrast to the previously successful Securing Asia 2012 and 2013 conferences, Africa was a focal point – the continent was recognised as an integral component of the global homeland security market and enabling the rises in economic growth of Asian countries including India and China. Harry Dhaul, Chairman of the Steering Committee began the day with a welcome address highlighting the growing need of the homeland security industry “to protect the haves from the have-nots till the have-nots become the haves”. This year’s panel produced an outstanding array of individuals to provide a comprehensive insight of the current threats and challenges to global homeland security.

Sir Jonathan Evans, Member of Advisory Board, Facewatch and former Director General of British Security Service MI5 (2007-2013) spoke about his past experience in leading MI5’s work to ensure the safety and security of the London 2012 Olympics. His discussion of this event highlighted the importance of community engagement and including a cyber dimension to the strategic framework of security operations.

Among the other highlights included Peter Cook, Director and Founder of Security Association for the Maritime Industry (SAMI) who spoke about the “tropical disease” of piracy. He stated that combined with geo-political issues such as territorial disputes, piracy continues to be a multidimensional problem for international maritime security. Of particular interest was the extraordinary first-hand insight provided by Rakesh Maria, Commissioner of Police in the Mumbai 26/11 attacks, who spoke about the lessons learned from the event. He referred to the security operation as “not a failure of intelligence, but a failure of imagination” and emphasized the critical role of the media in security crises through assurance of public morale and establishment of normalcy.

The rapidly growing African homeland security market, projected to reach $344.5bn in 2022, up from $178bn in 2010 has created fierce competition between Asian and Western firms to secure African homeland security contracts. As an international business platform, Securing Asia and Africa 2014 enabled buyers and sellers from Asia, Africa, Europe and the Middle East of the latest security technology to discuss their needs, requirements and ideas. The exhibition provided a successful platform to facilitate not only business deals, but ‘business to business’ relationships with exposition and B2B meetings.