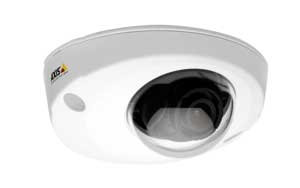 The cameras are specially adapted to respond quickly to changes in light levels, ensuring that high image quality is maintained. In addition, the use of progressive scan enables the cameras to show moving objects without distortion. Traffic Light mode helps to better distinguish colours of traffic lights in very dark scenes.

The AXIS P39-R Series allows for a quick and reliable installation. The desired field of view and a levelled image can be easily achieved by using the supplied lens tool to direct and rotate the ball that holds the lens and image sensor. The tool can also be used to exchange and focus the lens when a lens with a different angle of view is required. The cameras provide a pixel counter for verifying that the pixel resolution of an object meets specific requirements.