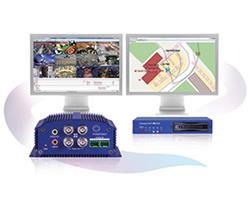 The Indigovision BX100 four channel encoder has been designed to be part of an ideal package for migrating mid-range DVRs to IP.

“The security industry thinks analogue is dead, but there are millions of analogue cameras still used worldwide. Most are in mid-range systems that are 20 cameras or less.” stated Marcus Kneen, Indigovision’s Chief Executive Officer.

“The mid-range market has been late to adopt IP video, instead using Digital Video Recorders (DVRs) to manage and record analogue cameras. The DVR is usually the weak point, outdated technology with low quality video recordings and the inability to handle high definition (HD) or megapixel IP cameras. We’re seeing a strong desire to migrate from mid-range DVRs to IP. Until now, the price has been too high or the technology performance too restricted.”

The new Indigovision BX100 four channel encoder is engineered to be the gateway for mid-range installations to an HD ready, future-proofed security system.

Marcus continued, “The BX100 is perfectly priced for the mid-range market. It may have a lower price, there’s no compromise on performance. Every camera input gives full frame rate, full resolution and better quality video than a DVR.”

“Encoding analogue cameras to IP is just one part of the security system, the video still needs to be recorded and managed,” stated Paul Murphy, Indigovision’s Head of Marketing, “Other manufacturers focus on either encoding and recording hardware, or management software. Indigovision develops all of these, and each is optimised to work together, giving a security system that’s HD ready and future-proofed.”

Indigovision’s Compact networked video recorder (NVR) is suited to mid-range systems. Each Compact NVR can record up to 20 cameras, all at full frame rate and full resolution, removing video quality and performance issues seen with a DVR.

“Used in some of the most demanding enterprise security systems in the world, Indigovision’s Control Center video management software (VMS) is renowned for its high-end performance,” continued Paul, “Other VMS manufacturers limit features for mid-range installations. This limited performance makes operations difficult and slows response time. Indigovision’s Control Center includes every feature, irrespective of installation size, giving incredible ease of use and ultra-fast response usually only seen in high-end systems.”

Control Center and the Compact NVR both support Indigovision’s extensive range of HD and megapixel cameras, as well as over 350 third party IP cameras, making the system HD ready and future-proofed.