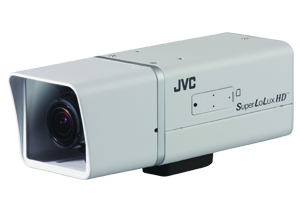 With the introduction of the first generation of Super LoLux HD cameras nearly three years ago, JVC Professional successfully combined ultra low light performance with full HD resolution. Now, from August this year, JVC is introducing the next generation of Super LoLux HD2 cameras (EX models), offering advanced technology with more than 30% improvements over current models in areas such as colour and detail reproduction, low light performance and WDR. The models were announced at this year’s IFSEC show in London.

The new Super LoLux HD2 technology is based on a number of fundamental design changes to the camera’s optical engine, with a newly-developed sensor and imaging technology. In particular, sensitivity is greatly improved from the first generation of HD cameras, and the new Super LoLux HD2 (EX models) deliver impressive detail and colour at light levels as low as 0.05 lux (0.012 lux in black & white), without requiring LEDs. 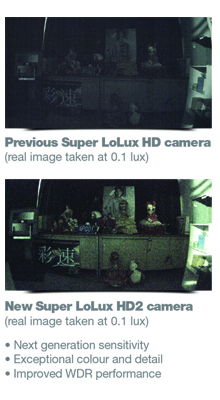 There are three box cameras in the Super LoLux HD2 range (VN-H37U(EX), VN-H57U(EX) and VN-H137BU(EX)), two indoor domes (VN-H237BU(EX) and VN-H257U(EX)) and an IP66-rated outdoor dome (VN-H257VPBU(EX)), each with multi-codec support including M-JPEG, MPEG-4 and H.264 High Profile. There’s improved smart backlight compensation technology for optimum WDR performance too, ensuring pictures are as clean as possible, whatever the lighting conditions.

The cameras feature multi-stream operation, with no latency between the running streams, so switching between them delivers a seamless picture. They can also operate at as low as 64kbit/sec for slower network environments, with MTBF figures of 90,000 hours delivering reliable performance.