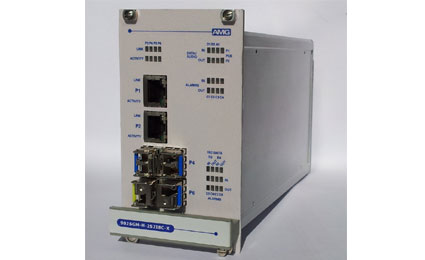 AMG, the British manufacturer of CCTV transmission solutions and sophisticated 5 Megapixel cameras, and Tecton, a designer, developer and manufacturer of CCTV solutions, announces that Tecton has integrated AMG’s Wonderbox – a series of ruggedised Ethernet switches – with Tecton’s Servalan Network Video Recorder, the Mate stand-alone solution for single camera recording, as well as with Liberator – Tecton’s Video Evidence Recorder for combined recording of IP and analog cameras.

Chris Hall, MD and founder of Tecton, says “The Wonderbox integrates seamlessly into our technology. The demand for integration was prompted by a highways project where the Wonderbox was part of the core backbone transmission solution. All we had to do was connect it, point to the correct IP address, and we were up and running with the recording of the footage. Tecton’s technology is widely used in government and transport surveillance solutions. We have a number of existing large scale projects in the rail sector and I can easily envisage a number of applications where the Wonderbox will ease the upgrade of legacy solutions to include IP cameras in a hybrid technology solution. Not only that, it will providing savings for the customers, as the existing infrastructure can be upgraded without the need for third party connectivity products.”

Sara Bullock, Sales & Marketing Director of AMG Group, says, “We are delighted with Tecton’s decision to facilitate complete integration with their DVR and NVR range. Tecton is renowned for their ruggedized and highly complex solutions for Critical National Infrastructure, Government, Transport and Rail solutions. With the Wonderbox we now have an approach that allows you to retain existing analog equipment alongside new ‘IP’ cameras/devices within the same network, dramatically reducing infrastructure requirements and capital expenditure on hardware for new systems. With the integration with AMG’s Wonderbox range, another step has been taken in bridging the IP-analogue gap, particularly in the transport sector.”