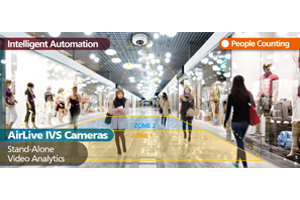 AirLive introduces new cameras with the IVS People Counting function – MD-3025-IVS, BU-3026-IVS, BC-5010-IVS Intelligent Video Surveillance (IVS) system — People Counting provides advanced, accurate video analytic that can be used to count people, which the amount is able to be set to trigger alarm output or various notifications, and also will be stored in the database for further search and analysis. With the data collected from People Counting function, businesses is able to analysis and plan their business by observation of the customers flow at the entrance, surrounding paths of particular event, special section of a mall, and ticket stand.

IVS is an excellent solution for use in business and public places such as: special events, shopping malls, department stores, stadiums, parking lots, factories, stations.
The primary consideration of choosing the location and position of cameras used for counting is that the camera should see the people counted fully.

Intelligent Automation
Imagine a world where machines can do automation for you, things that we only dreamed about in science fictions or movies. Imagine a camera that can count people, recognize faces, aware of the crowd, and warn you when there is a potential hazard. At AirLive, we believe that IP Cameras can do more than just video recording. That’s why we spent over two years to develop the industry’s most comprehensive intelligent IP Camera till these futuristic solutions are ready now.

Standalone Video Analytics
Each AirLive IVS(Intelligent Video Surveillance) camera has 6 built-in video analytics functions that encompass 7 major applications. It is completely standalone and self sufficient. That means there is no need for expensive server and professional VMS software licenses.

Counting + Event
Most of the intelligence function on the market today can only perform counting or trigger event. AirLive’s IVS camera go one step further by pioneering the Counting+Event integration, so that the camera can take action after certain number of occurrences.